By the vintage period most of the stuff in cars was sorted, IFS, overhead cams, monocoque, 4 wheel brakes and the list goes on, of course most vintage cars did not have these things but they were available to any Lancia owner.  However some of the less glamorous things were not sorted, namely a method of getting fuel into the carburettor other than gravity and a way of measuring how much fuel left in the tank.

So this leads me to my Le Nivex fuel gauge and vacuum tank, the former not working the latter partially missing. The gauge, I believe is just a sensitive pressure gauge like a barometer connected via a rubber tube to a spring loaded hand pump which in turn is connected to a pipe that ends at the bottom of the fuel tank. To check the fuel level the dashboard mounted pump plunger is pulled out (my gauge needle goes backwards at this point, I think it should be checked by a one way valve in the base of the pump) The plunger returns under spring pressure, the gauge reads in the positive direction, stops momentarily and a reading is taken. The more fuel in the tank the higher the pressure so the greater the reading on the gauge.

That is what is supposed to happen, on the Lambda if the gauge reads any more than about 7 gallons it would just keep going and refuse to return, the only way to get it back was to pull the gauge out and lay it flat on it’s face, it was like the needle pointer was too heavy, so that is why in the photo the needle now has a rather inelegant knob to counterbalance the needle. It now does return although it’s accuracy is yet to be determined, I will have to fork out for a full tank of fuel to see if it reads any higher than the 5 gallons currently.

Here is a basic circuit from http://www.laluneta.com.ar/

I would like to get my vacuum tank working but alas it’s innards were only partly in attendance, luckily Iain Simpson put me onto a L’ Exhausteur vacuum tank for sale in NSW that looked totally different but had the same insides as mine, so I now have all the ingredients and by saying so here, I will now have to do something bring them together…stay tuned 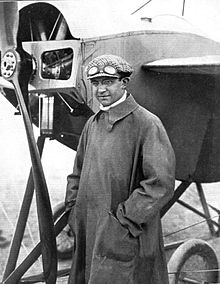 By the way both the Le Nivex and L’ Exhausteur were both made by Charles T. Weymann of fabric body fame and according to Wikipedia had a US father, a Haitian mother and was born on a boat. He also won the Gordon Bennett Aero Race in 1911, during World War 1  was a Nieuport test pilot and managed to live for 87 years.

Lastly, an American  John Gilbert Collison invented a dash mounted cable operated fuel gauge in 1917 that he then sold onto GM.  In 1951 he went on to invent the artificial hip.

This entry was posted in Lambda. Bookmark the permalink.