My new year’s resolution of getting an Austin on the road by December is looking less likely as I didn’t realise the impact of cold weather on my productivity, never mind it will happen just not by December

The Special’s LWB A7 Chassis

All the chassis parts for the A7 Special have now arrived so the now rustless Chummy will take a breather.  There is a rolling chassis where before there was a pile junk, some would say I now have a rolling pile of junk.

There are three things on an Austin Seven that could be seen as drawbacks, low power, poor brakes and a tendency the fall over when cornered.  I like thousands before me are going to have a crack at eliminating most of these on the Special and lessen them on the Chummy.

First off, the rear quarter elliptics have been flattened this lowers the car but also stops the rear steering that comes with the spring’s effective length changing as you corner.  The front suspension also now sports a flattened spring, a bowed axle and separate shockers, all these changes (except the shocks) mess up the caster angle so I’m waiting for some lowered ends that will be attached to the radius rods that in turn may have to be shortened but before that I need to install the engine and gearbox to see what their weight does to the whole equation. 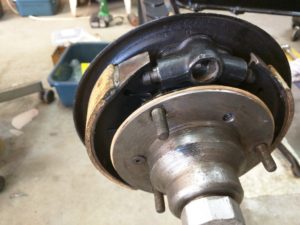 While I am waiting for that to happen I’m coming to grips with the brakes which had been converted to hydraulic in such a way that the chance of stopping would have been purely accidental.  Needless to say, they have been consigned to the ever-growing scrap heap and replacement late model “Semi Girling” mechanical units installed.  These improved brakes were supposed to cope with the later model Austin 7’s which were quite heavy so on the Special they should be good?  Better? We will see.

Any student of Bugatti or Lancia mechanical brakes will be bemused by the terrible geometry of the Austin brake system but given that it was only Herbert and his young offsider that designed the car in a very short time it is a remarkable job for it’s day, however given its long production run you would have thought that a little more “design” could have crept into the braking system over its life. 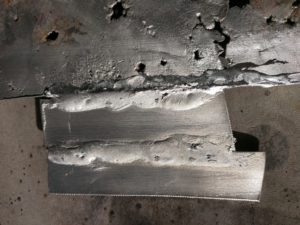 On another subject, I have been at many car shows and have often seen people demonstrating welding aluminium on old Coke cans and have always been tempted to buy the product but thought it was all down to the skill of the operator.  The chummy has some aluminium panel damage so I have bought some of these magic brazing rods from eBay, the stuff works because it melts at around 370° and Aluminium melts at around 600° so it can be done without blowing holes, they claim it’s stronger than the aluminium also you can do it with propane or Map gas.  The picture shows my first attempt so I will need some practice before the main gig.

This entry was posted in Austin 7 Chummy, Austin 7 Special. Bookmark the permalink.