When I get a new (to me) car I tend obsess a little too much and read everything I can about it and ask questions of the gurus to find common ground between the two. Case in point, tapered pins, Ettore must have loved them for not only are they in the clutch linkage or should I say should have been in the clutch linkage but there is also three of them between the steering wheel and the steering box. This is where my general engineering ignorance comes in, for I thought that the taper was there to stop the pin from wiggling about and everything was reliant on the shear strength of the pin…..mmmmm evidently not, apparently according to my new bible Grand Prix Bugatti Technicalities: “First as with most Bugatti taper pins, the drive is not taken by the taper pin itself but by the friction the taper pin creates by expanding the shaft into the coupling bore”.

So with that in mind I had a look at the steering wheel pin, it was the wrong way around (I’ll take credit for that) also Bob King mentioned that the threaded end can shear or the nut unscrew and then the pin will drop out with interesting consequences so I’ve slotted the big end of the taper and wired it on. While I was at it I did all three so hopefully the front wheels will continue to obey the steering wheel.

Last weekend I went on the Bugatti Club Pur Sang Rally also attending were the Ferrari (Carby Section) Club we had a ball in the old cars …not sure how much fun the Ferrari guys had trying to keep to the Victorian speed limits. 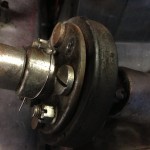 Wire twisting tool worked once before it needed rebuilding 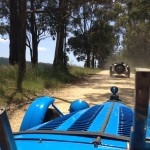 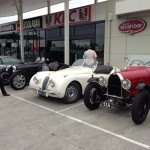 Always wanted one of these

2 Responses to Read the Directions