I always thought a crown-wheel and pinion change involved some black magic or at least a human sacrifice or two. However that was before the Internet, before YouTube videos of helpful chaps telling you exactly what to do and of course you can watch them over and over again….resistance is useless.

The videos I watched were telling me how to adjust the back lash on a Toyota Tundra as it seems Ettore did not do any YouTubes although I am sure he would have used them if available, probably instructing from the back of his horse.

On my first test drive I was astounded to hear absolutely nothing from the back axle, previously it was the lovely straight gear howl of first, second, third and then the howl of the straight bevel crown wheel and pinion necessitating ear plugs to preserve the last vestiges of my hearing. Now it’s the same lovely howl through the gears but silence in top, it does trouble me so I stop every now and then, pull the back of the seat forward to check that the diff is not hemorrhaging, seems too good to be true.

I had a list of at least 12 things to do while the floor pan was removed, things like split pinning nuts in the brake circuit, moving the blinker switch, installing the new alternator etc etc. they were all attended to although after screwing the floor pan back on and wiring all the screws, I realised there was a number 13, it will have to wait.

I have since been on the Five Valleys Rally in South Aus. Which involved reasonably short drives on glorious roads with long stops for food and drink, perfect really.

Yesterday I fitted the new wheels, these are standard at about 2.5″ wide so much narrower than the ones that were on the car, it steers much better now. The other problem I’m hoping it will fix is the under steer when I encounter bumps mid corner, the front end would skate over the bumps and go straight…..bloody terrifying, so I will report back later as I am off to find some corners with bumps and no oncoming cars. 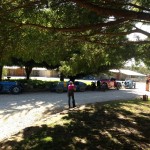 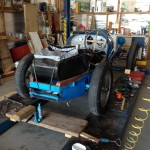 1 Response to Done and Dusted