In my last post I was bemoaning the fact that I had a dodgey throttle barrel, it looked like it was half finished and did not match the other smooth one at all.  I found a downdraft  carburettor on Prewar Car thinking I would use the barrel out of it.  Unfortunately it was the wrong size but also it had a throttle barrel like the jagged “wrong” one I already had.  Here is a picture of another carburettor on Ebay like the one from Prewar Car. 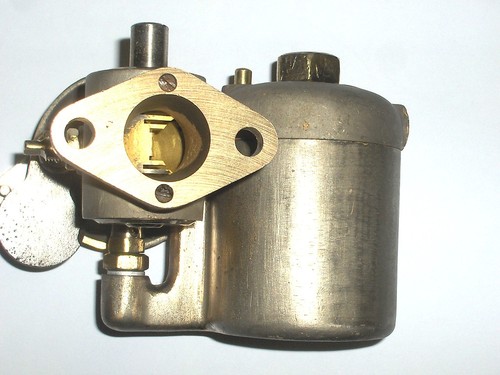 So it looks like this type of barrel is legit. The problem is I have already “fixed” my barrel (I think the previous owner had already filed it a bit as it was not quite like the one in the picture).  So I need two barrels like the picture or one smooth one if they exist or put a 35mm single carburettor on like it was from the factory.

Better still I will just go back to using earplugs.

On further inspection the barrel in the picture is radically different, my jagged barrel looks so because all the tangs in the picture had been broken off to approximate the shape of the smooth one. I think the above type would give a smoother transition coming just off idle so I assume it’s a later design.

1 Response to Right is Wrong?