Other uses for Aluminium Cups

The VSCC has a New Years day outing to the old Muckleford South school so I thought the Sunbeam with it’s now clean radiator would be a good candidate for about a 500Km round trip that should shake out some gremlins.

The other bit of logistics for the day was dropping Sue off at the airport on the way.  Given the Sunbeam’s unpredictable record so far this was thought an unwise decision so Sue found more reliable transport in Des’s BMW.  As it happened this wariness was completely misplaced as I made it to Sunbury (several Kms past the airport) before the boiling started.  After that the trip was punctuated with regular stops to refill the radiator the rate being about 10Km/litre which was greater than the fuel consumption, although only a little.

Sunbeam 20.9’s have a history of heads that crack and after inspection, the No. 6 spark plug was very clean so of course I assumed the worst, but the only thing that did not gel was the lack of a big cloud of steam out the tailpipe.  To cut a long story short it seemed that a baffle was missing in the top of the radiator so at high engine speeds water was going straight out the overflow.

The pictures below show an alternate use for an Aluminum cup, I’m not sure of it’s longevity but they come in packs of six so plenty of of time before I have to haunt the Op shops for more. The result, 50Km traveled yesterday with no perceivable drop in water level, the cylinder head leak must be very small enough to leave for the moment…I hope. 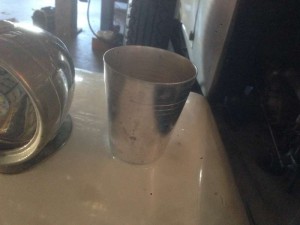 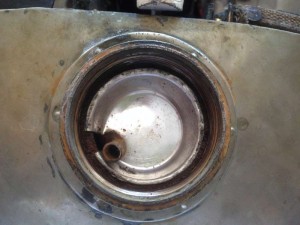 This entry was posted in Sunbeam 20.9. Bookmark the permalink.

4 Responses to Other uses for Aluminium Cups