I have never been good at doing more than one thing at a time and this last month has shown that to be the case.  First off the Bebe has been making an engine speed clattering sound, so my rather fertile imagination had constructed all sorts of theories based on no facts at all. As the sound seemed to be coming from the RHS of the engine I figured it could be a loose cam lobe (these are keyed onto the shaft) however after mucking about with dial gauges and checking cam timing this looked unlikely. The RHS of the Bebe engine also happens to have the magneto and as this one is a later addition and an impulse type the most likely culprit is the impulse mechanism…and it was. Unfortunately, due to an ill-founded belief in my ability to repair the impulse mechanism, I broke a small die cast gear during dis-assembly. Luckily these Fairbanks Morse maggies are well provided for by the stationary engine/ tractor fraternity so a list of new parts including a new impulse spring and replacement gear was ordered.  The parts arrived …the gear was wrong, several emails to the supplier and silence, to cut a long story short I have now found a NOS gear on Ebay and even though I have other jobs on the Bebe pending, nothing is going to happen until that gear arrives.
Meanwhile the Lambda is having the same treatment, it’s stuck with its camshaft away being reground.  However I did get something done.  Before sending the cam away to Clive I was trying do the cam timing and having a hell of a time working out when the cams rockers were “rocking” ( a point half way between the  exhaust valve  closing and inlet opening) at this point the crank should be at TDC and using the verneer adjustment on the cam gear, all should be good in the world.  The problem is that the “rocking point” needs a feel for the mechanical that did not make it to my side of the gene pool. 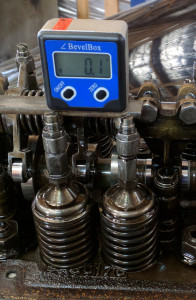 Here is where I found yet another use for the “Bevel Box” electronic level, using a couple of rare earth magnets and a lump of steel I attached the level to the top of the two rockers in question. I then turned the cam so both rockers were on the heel of the cam, zeroed the level then turned the cam back until it registered level again and that is the rocking point …who needs feel.

So although like the Bebe there are many other jobs to do on the Lambda before the Tasmania Rally in mid March, my right handed, left brained self is stuck in serial mode.
They do say that multitasking is just a way of efficiently producing low grade work.  This may not be entirely accurate but it does bring me much comfort.

This entry was posted in Bebe Peugeot, Lambda. Bookmark the permalink.